February 19, 2020
So, I have had a lot on my mind lately, and plenty to write about, which is not unusual. It's pretty much par for the course for me... Lack of content, ideas or words is never the problem for me. It is usually laziness, time-wasting and procrastination that demolishes my creative efforts and endeavors. It's not something I'm proud of, but it's also one of my biggest struggles. So I'm not going to beat myself up, just keep living Dia por Dia, and doing my best to improve things like that, the things about myself that most make me wanna beat my ass. Most of y'all can dig that, I think.

Anyway, as I shuffled on over here to think about my blog, and writing, etc, I took a look at my theme and decided it had been way too long since I gave it a face-lift. It needed updating in a major way. Since I work in the field of Web Development / Design, it's terrible that I have waited so long to pop over and ensure that my blog was "mobile friendly", responsive and all. It was pretty sad. Now even though I go ahead and use most of the template features that are built-in to blogger, I've always given it a few of my own "Bob Ross" tweaks here and there... so it's still got my "scent" on it... So by the time you read this (All 2 of you followers of good ol' Auntie Jaxxx), you'll find that it is much nicer on a mobile phone or tablet, varied screen, whatever you happen to be checking me out on. You're welcome.

Now, on to the thoughts of the day: Hmmm, let's see, what can I drone on about on this fine Wednesday afternoon? Well, first and foremost this time of year, I have a handful of television shows that I dote on, that basically make or break my week. Tuesday nights, I tune in for NBC's "This is Us" (and have followed the series from the very beginning, so I am emotionally involved heavily with this family and its characters, you betcha!) If anybody reading this is also a fan and has caught up, feel free to leave a quick comment on how you're feeling on the current season's storyline? I for one have honestly YET to be too disappointed. I'll have issues with certain things that happen or how particular characters act, and react strongly, but that's just normal especially when you're really into a plot, and the writers do such a great job of jerking us around on such a deeply emotional level. Partially, I believe this is because the show touches on so many topics and life situations that "hit home" with a lot of us, both male and female, spanning all cultures, lifestyles and skin tones. I think it brings a lot of us together at times too... All around just a great series, and if you haven't yet watched, I encourage you to tune in. 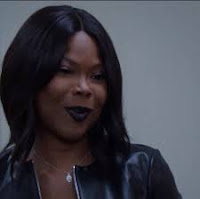 Another series I fell in and got myself all wrapped up in happens to be Tyler Perry's "The Haves and the Have Nots". Another fine cast of characters, some of which we LOVE to HATE!! Veronica Harrington, for one, I always end up rooting for her demise, but then get to thinking that if she were to leave the show, a magical and genius level of evil and entertainment would definitely be missing. It has been a long time since I have witnessed such deep-seated insanity mixed with pure balls and meanness wrapped up in one fabulously ferocious "femme fatale". The fact that I can't stop myself from hating on her combined with my growing outrage for her is a testament to her talent as an actress... like with any character that we are so heavily affected by... so Kudos to the cast and crew of both of these shows, you guys make my week!  What else, what else? Ahhh I had an interesting little thing happen a couple of days ago that threw me into a time warp of sorts.

To know me is to know that it doesn't take much to get me reminiscing and stuck "Back in the day when things were cool...", because I have a specific time period that for me (at least in retrospect) was damn near perfect, and stuck in my mind as "Before the World Went Wrong"... but I digress... I got on my Old School music kick, which often includes the likes of "Mint Condition" (if you don't know who i'm talking about, do yourself a favor and get educated, hit YouTube. Then some Erykah Badu (one of my faves), and of course it dragged me through the alley way and I ended up watching "Waiting to Exhale". You see, there is a certain vibe and playlist that decorates this time period of my life, and it can get downright painfully emotional for me. My very own Novel or Memoir (whatever that turns out to be) is likely to be heavily focused on this era and its events, it's in my mind, blood and soul, but still hasn't made its way out to paper in the right way yet. I am a huge believer in Divine Timing, but also a realist when it comes to knowing that I am lazy and a hopeless procrastinator, as mentioned above, so those two parts kind of do an oil and water thing when it comes to this, so I don't want to beat myself up but I also get a little pissed and worried that I haven't made much progress... I truly want to write this, and I feel it, I know it is alive and just waiting for me to unveil it... why are creative things so hard to execute at times? I feel like I am the only one who has such problems accomplishing things that I need and want to do. I really need some undeniable inspiration to strike me.

Yeah, this little 'warm breeze' from the past that blew through my screen of existence ruffled my feathers a little, I guess I wouldn't say in a bad way, but it made me focus on those feelings, and I still can't quite shake it. Makes me wonder "What if our What Ifs are somewhere wondering What If too?" Even so, there is not a lot you can really do about those "What Ifs" (I guess there are a few exceptions) but I think that's why we have so many Novels in the universe... people sometimes have to get by on writing their perfect ending. Now don't take me to mean that every book is written for that sole purpose, to create the perfect ending, because there are far too many varied genres and plots that rather challenge that hypothesis. I'm also confident that many books are just that for an author, I guess because my own ideas are admittedly a way I might explore the waters of my very own "What Ifs"... guess we'll see when it finally decides to expose itself and become the entity that it's destined to be... Lord knows I have had countless amazing creative inspirations (authors, musicians, story tellers) that give me the spark and the passion to dig deep and find her.

Meanwhile, let's go Mobile!! Take a road trip, whether physically or in the vast world of our imaginations... after all, a "Getaway" is a getaway, and much needed. Keep creating, magical universe!!! I'll do my best to as well... 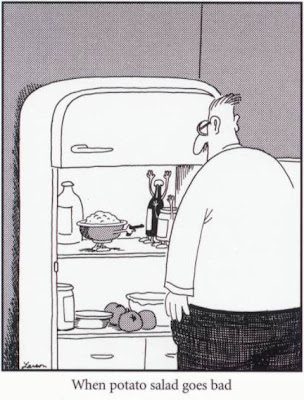 I have always loved Far Side cartoons... this one about Potato Salad going bad was one of my favorites. Just the mental image of spoiled food pulling a gun gives me a giggle. Larson rules.

However, bad food in the fridge is sometimes no laughing matter. I recently let some broccoli sprouts go beggin' and they tried to take the entire household hostage, guests and all. Funny thing about broccoli sprouts, they are against guns and drugs, and totally for Animal Rights but they carry tazers. It's really confusing, and a lesson hard learned. :)

So anyway, yeah another make up post I did for yesterday. So sue me... not that it makes a big impact. We've had internet connection problems, which are still ongoing. The technician arrived in decent time and said our equipment was o.k., and that there had been an issue going on in our area, here and there... they were working on it. Maybe it will be resolved soon. I sure hope so, it's just agitating and it goes down at the worst time…
Continue Reading » 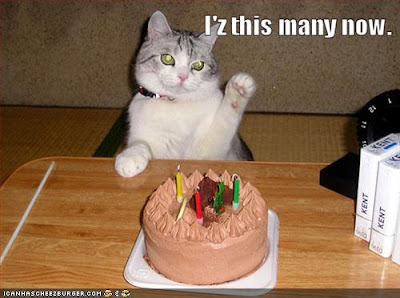 Yes, I think I will just claim 15 again, and stay there. Looking back, my teen years were worry free. I mean, there was the bi-weekly broken heart and all, but geez. It was a time when people said, "You've got your whole life ahead of you." and it was still true... wait, well it's still true, just now there is less of it ahead of me. That's all.

No, I actually didn't get a cake, or any kind of party... Didn't really care.

Basically, I just took off two extra days and treated myself to a 4 day weekend in honor of my birthday. Today, June 22nd is the actual date. However, my honorary "celebration" of it began when I got off work Friday night. We met up with some friends at the Midtown Sekisui, and then came home to watch a few more episodes of "Weeds", a tv series that many of you are probably familiar with, one that my 'ol' man' got me hooked on. Finally we have finished the series thanks to Netflix Streaming, and can await t…
Continue Reading » 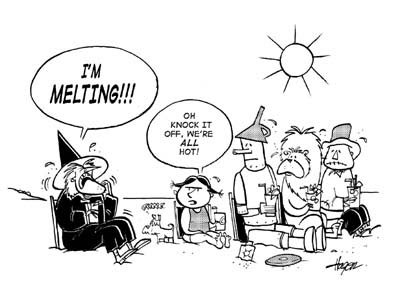 For those of us who are a slave to the grind, we've almost made it through another work week, that's a great blessing! For those of you who don't have to report to anyone for your paycheck, well it's another beautiful day, so enjoy!

Richie went back to work today after Monday's oral surgery, still felt a bit loopy he said but all-in-all it has been a swift recovery. I'm glad... I did the best I could to take care of him.

So the weekend is in sight, and I'm trying to think of fun things to do. It's so hot weather-wise, and I don't mean to complain but I hate feeling sweaty and smelly. I like being pleasantly fragrant and sassy.

Nothing much to report otherwise, so I will let you go with a few cute graphics about the heat, one of which I stole from BBC's blog again (he always has the funniest cartoons). So there you go. Happy Thursday.

Aunt Jackie
South of Heaven, United States
"Me? I'm rotten to the core."

Feel free to reach out and say hello, what on your mind? Email: auntiejac@gmail.com

Best of Aunt Jackie
(Must Reads)

Aunt Jackie - The Early Years
My Daddy The Pistol
My Mom The Goddess
The Time I Almost Married Slash
When Richie Met Jackie
Hey Seventeen (A Letter To Myself At 17)
Channeling Picasso
Thursday's Better With Dali
Butterflies Zebras and Moonbeams (For Z)
Motorcycle Madness
Wistful Longing of a Saturday Morning
On The Road Home
Spinning Myself Into a Blissful Stupor
I'm Not Josie Grossy Anymore!
Priscilla Queen Of The Salon
Remembering the Mid-South Fair
Waxing Poetic on the Mall of Memphis
Close Encounters of the Dork Kind
Our Life Is Made By The Death of Others
Reflections on Bliss from the 32nd Floor

All of Aunt Jackie's creations and content are Copyright © Jacqueline Wood. Please respect.